We had to get up early for our trip as the retro/antique market starts at 8am.  It goes on until 8pm too but everyone knows the early bird catches the worm; although we do not really need any ‘worms’ at the moment. The old town sits within impressive tall medieval walls and, having parked just outside in the ample free spaces, we walked across the road and up the stairs into the old city.  The cathedral is the first building a visitor comes across, with it’s beautiful and elaborate vaulted and exuberantly painted ceilings and domed roof. Saint Florido and Amanzio also boasts a carved entrance which unusually has chubby babies playing instruments or just being.  Across the road is a large piazza and tower.  The ‘tower’ being a really important feature of any Tuscan city/town worthy of mention.  Towns were judged by their neighbours by how many towers they had and how tall they were, and Citta del Castello has two, the other being a circular bell tower 43.5 metres tall built in 1283.

A feature of the first square was the painted facade of a building at the far end.  From a distance it looked as though their were two faces peering out over the windows, but as you got closer the painting turned out to be dancing naked angels. 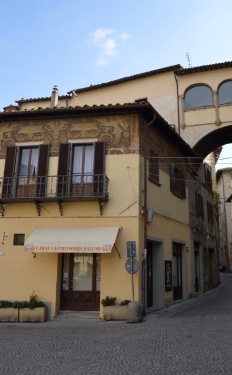 Through the narrow street and on to the main square with yet another lovely facade that of the Mayor’s Palace with it’s double clocks showing hours and minutes separately. Also on the square is the impressive Bank ‘Cassa di Risparmio dell’Umbria’ building with its portico (photo from Cicci’s Tour).  Designed, no doubt, to make someone feel very secure about putting their life savings into that structure. 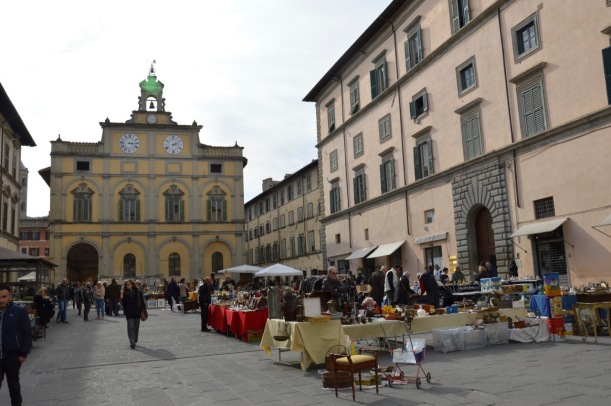 An imposing old building that may have been an old hospital is a very sad monument.  It must have been quite grand once and still has some clever trompe-l’œil windows amongst all the broken ones. 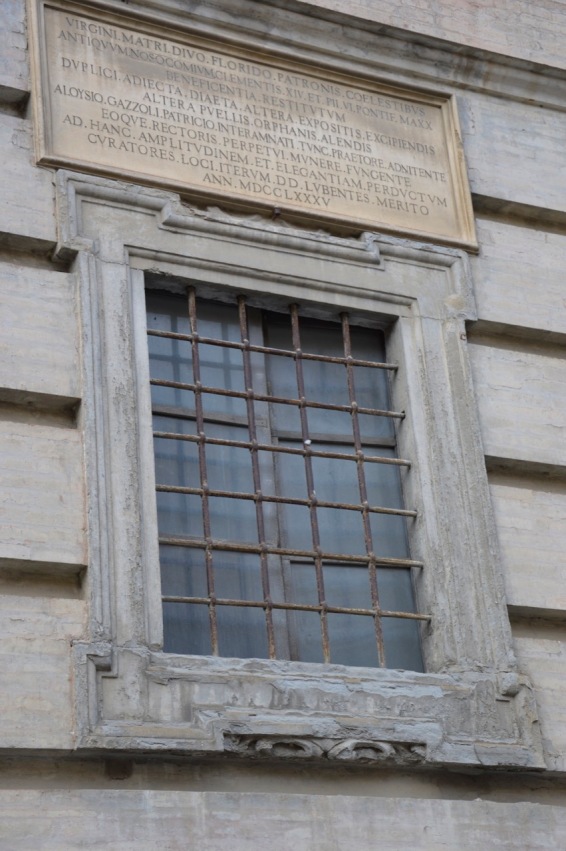 Along the road is the Pinacoteca (Museum) with its painted facade and classical gardens.  Placed inside the old Vitelli Cannoniera Palace the building houses the collection of paintings and arts for the region of Umbria.  We need to come back to this town to visit this museum and to climb up to the top of a tower or two.

The market had lots of stalls selling retro (great selection of designer handbags, shoes, sunglasses and jewellery) antiques (furniture, mirrors, paintings and books) and lots of tat (house clearance and repro junk).  There were some great stalls of antique linen: tablecloths and bedspreads, with monograms or cut out work and the initials of couples who would have treasured these pieces as part of a wedding trousseau many years ago. It was fun wandering around though looking at the wares, the stall holders and their customers and a variety of dogs worthy of a day at Crufts.  We even met an Italian fox terrier called Luna who was mainly white with a beige patch and who was apparently as bouncy as Daisydog.

We came away with a lovely vintage gilt picture frame (which is now even more distressed as Jamie dropped it on the way back to the car!), a Japanese plate and a beautiful wooden pitch fork used for turning the hay.  What a mixture but all bargains including a silk Marina Rinaldi scarf for €1 and a silk and wool scarf for €5. [What was that about not needing any more stuff? Ed.]

We had lunch sitting outside Piadineria Vecchia Rimini in the Cathedral square as the weather is still quite mild.  A new food experience too – a ciaccine. A fried flat bread with different fillings.  You could also have a plain flat bread alternative – a piadina, or a pizza.  Such choice. I went for a ciaccine with gorzonzola, speck (smoked air dried ham) and radicchio.  It was great and hunger meant the I forgot to photo before eating, oops!  Jamie’ s was filled with parma ham, the amazingly named cream cheese ‘squacquerone’ and rucola.

And now on to Arezzo……