We walked Daisy through the park this afternoon for the first time in a week or more because of the ‘Processionary Caterpillar’ risk.  Signs from the local council / medical centre have appeared around town, in the parks, avenues and car parks warning of the dangers, to humans and animals, of touching these beasties.  Apparently violent allergic reactions and all sorts of nasties and they even warn against squashing them as the danger remains from the hairs on their now flattened bodies.  Yuck.  Mind you I still haven’t worked out where they are ‘proceeding’ to, exactly.  They hatch and fall out of trees to cross paths in long chains to then presumably re-climb said trees to become moths or butterflies or whatever.  Why don’t they just stay up there and stop all the grief.  Life is strange.

It was lovely in the park as the grass is really green and full of wild flowers. Lots of pine cones on all the paths after the storm, and ripples of pine needles where the the rain has run down the sandy paths.  We went for a drive to a local junk store, although he might be offended to be called that.  The shop is called ‘Market of the Used’ (Mercatino dell’Usato).  Inside it is the usual mix of discarded stuff from house clearances, with an occasional treasure.

Last time we visited we picked up the retro bathroom mirror.  This time there was a fab 60’s floor lamp but Jamie wasn’t keen and just didn’t appreciate it’s full potential.  So no bargains today but a wander around their garden section is always interesting with items from a sculpture of a pope, complete with dove and olive branch, to 6 ft stone lions and a huge array of beautiful pergolas with fancy ironwork chairs and tables just waiting to be covered in tumbling roses or twisted wisteria.  If you have urgent need of two terracotta geese to grace your gravel, he’s your man. 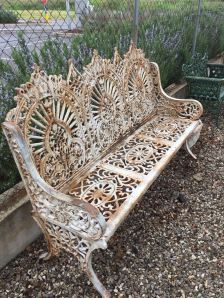 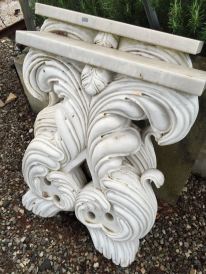 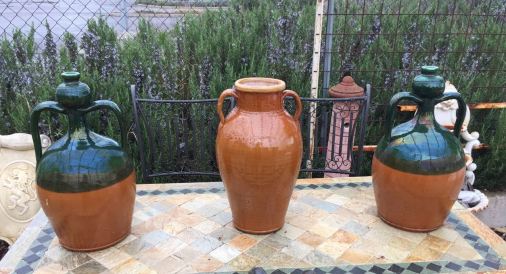 House is proceeding apace now with shower trays and tiles on the bathroom floor. Thought it might be a novel idea if the new coloured resin shower trays were protected by plastic or cardboard rather than being tramped over by builders and electricians in their workboots!

But I am reaching a ‘I don’t care just do something’ stage as it has been one compromise after another as mentioned in earlier blogs. At least with a new build, you don’t have to try and elbow stuff into a medieval shell. Everyone who visits, be warned that I will have a very short fuse if asked “why didn’t you do……” or “did you not consider maybe…….”.

Today’s compromise was the wrought iron bannisters which thy say won’t fit as the terracotta stair tiles do not leave enough space for fixings. We can’t see what the problem is – surely the whole point of wrought iron is that you can bend it and shape it to go around things. I actually don’t want any bannisters; just an iron hand rail on the righthand wall, but the architect says this is against building regulations.  Our American friend has an open stair case with planks of wood set onto a main metal spine and no hand rail at all.  How did that get by the planners?  Magazines of trendy Milanese flats have glass staircases sweeping loftwards and rustic Trulli in Apuglia have open staircases leading to sunscorched roof terraces. Yet our wide stairs with a solid wrought iron handrail fixed to a wall ” is a risk”.  OK rant over, but the quest for a solution that doesn’t involve drilling a holes in new terracotta stair tiles at 10 cms intervals up five flights, is not!

The builders have managed to find one small piece of original medieval wall that isn’t too much of a mess of 600 years of building products.  It is on the ground floor and cheers me up when I come down stairs.

Roll on the weekend: have roller with extendable handle and WILL paint.