Whilst trying to find a parking space at the Novotel outside Reims, we noticed that most of the spaces were occupied by amazing examples of Maseratis. The Maserati Club were touring and some of the cars were spectacular, not just the classic ones but also some of the current styles. These beauties also had their own security guard overnight.  The total value in that car park would pay off the national debt of many small countries… Maserati Ghibli, Maserati Alfieri and a Maserati Merak to name just three, and in all about 50 cars there.

Maserati was started on December 1, 1914 as a small car repair shop in Bologna by four brothers, Alfieri, Bindo, Carlo, Ernesto, and Ettore, came together to build a business that would become an empire. 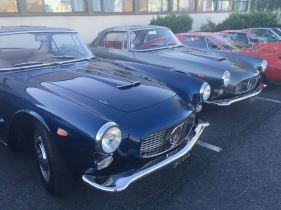