The other day I spotted a poster advertising what I thought was a plant fair in this nearby town.  It seemed that there was to be a sale of plants, a talk, a cooking demo and something else at 5pm.  I didn’t have my glasses with me but thought it sounded interesting, and a little less stodgy than the six day festival of gnocchi in another neighbouring town.  Although what you can do with gnocchi, and that would last for nearly a week, might warrant further investigation.

Anyhow, we got up early, had breakfast and packed Daisy, ourselves and bottles of water for all, into a bag. As we passed the poster again on our way to the car we noticed that the first event was to be a walk to a pool and waterfall at 10am.  It was now quarter to and so we set off for Montegabbione.  Arrived with time to spare but thought it was a bit quiet for a flower festival and then it dawned that ‘Castel di Fiori’ was a hamlet nearby, and not a building in the town.  Back into the car and down a dusty white, stoney, single-track road which brought us to ‘Castel’ and we parked in the allotted olive grove.

A steward said the walk had already set off but that we would soon catch them up, so off we set down the hill and sure enough the path became very narrow and steep so everyone was slowed down by the terrain.  After a precarious walk down the hillside we arrived at the ruined water mill and a series of lovely pools fed by a small waterfall. 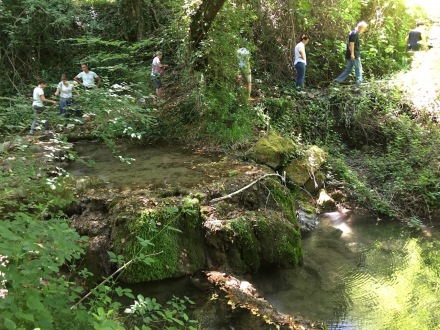 There hasn’t been much rain for the last two months and so it wasn’t as full in parts as it might have been but it was still rather spectacular and the walk through the cool trees down to the bottom of the valley was such a great thing to do on a Sunday morning.  Daisy got to have a swim too. The walk back up to the village was not quite so restful, by now it wasreally hot as it was nearing midday, and we arrived back to find the narrow medieval streets lined with beautiful plant stalls and other craft folk.

A cold drink and some food was first on the agenda though and the organisers had arranged a series of tables and benches under awnings to provide a simple choice of delicious paninis, dishes of pasta and salads.  There were homemade cakes, coffee and even a waffle stall.  Having found a seat and drunk a whole bottle of water we wondered where our food was.  As foreigners we hadn’t realised that once you had ordered and paid for your food you then had to give your order slip to a waitress who would then deliver it in due course.  We were blissfully sitting for ages wondering where our lunch was until this process was explained to us.  Too hot to fuss and when my Greek salad and Jamie’s tomato pasta finally arrived it was very good, and a slice of apple cake and coffee completed the meal.  Good healthy food, set up in an impromptu way for hundreds of people and I couldn’t help wondering what an English equivalent would be.  Burgers would feature and a doughnut stall no doubt. 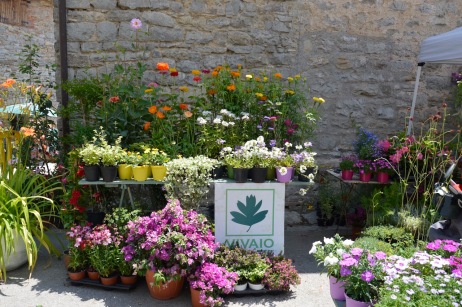 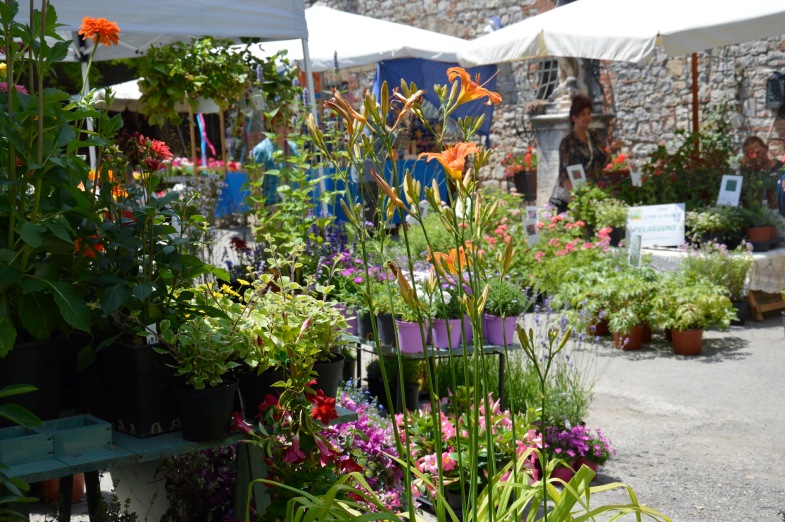 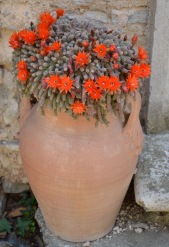 We wander back through the village and the beautiful flower stalls and meet Eugenia from Salto del Prete Vivaio (garden centre) whose stand is packed with the usual gorgeous plants.  Having already bought some amazing double, red echinaceas from them the day before at our own market, I resisted the urge to buy some purple salvia; we do not have anymore room! Around the corner was a stand selling herbs and these I couldn’t resist and I am sure I can squeeze them in somewhere and if not they can always live in a pot for a while.  A perennial purple basil, a dill and a tarragon were chosen.  And just as we were leaving I spotted another splendid orange echinacea called ‘Rainbow Marcella’ which would look fabulous with the others and a sweet little blue trailing edge-of-border thing called an evolvulus.  Enough already!  Time to go and plant these babies but not before enjoying a glass of wine from another friend spotted running a stall promoting her friends winery. Small world.  (To those of you wondering; I haven’t forgotten the 100 or so tiny lavenders waiting back in the garden for a home.  They will be planted as soon as the orange tree goes in tomorrow morning.)