[Paola has got back to writing her blogs. She wasn’t happy with my version of the kitchen, so here is hers…]

They were going to arrive at 9:30 but sure enough the kitchen fitters arrived early at 8am.  Thought they might so we arrived at 6:30 to get a final coat of paint onto the kitchen ceiling after the plaster repairs.  The fitters efficiently unloaded everything into the back garden. It turned out that this was all done in order of assembly. And luckily no-one appeared out of nowhere with their car trying to get through.  In fact they parked there all day without problems.  Even the man collecting our rubbish said he would go around the block instead of making them move.  I owe him a beer. 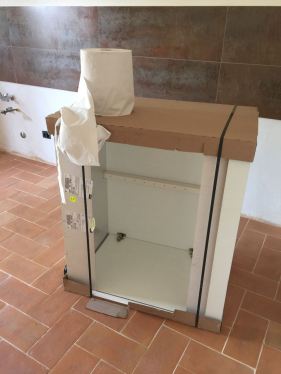 The team of two divided up the work; one organised all the doors and fitted the handles and the other guy installed the carcasses.  These arrived pre-assembled so it all went really quickly.  There was quite a lot of cutting as the room is seriously not square.  They were very happy about being able to work in the garden as at most sites they have to work indoors, although by noon with the sun beating down it wasn’t quite so easy.

The base units, oven and fridge unit and the sink were all in by one o’clock, so we broke for lunch and took them to Serenella for the workman’s menu.  That allowed Patrizio, our electrician, time to get into the house and finish fitting the gas pipes and the sink tap and waste.  A real miracle to get all the necessary parties working together, on the same day, to finish a job. 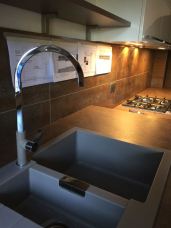 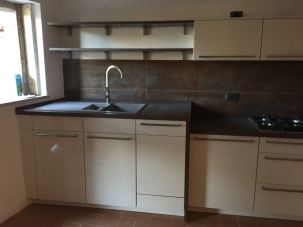 After lunch the fitters carried on with the wall units and worktops.  Every five minutes they had the spirit level out to check everything and after putting the shelves up, finished by meticulously checking that all the doors and drawers were level and the spacings exactly the same. By 7pm we had a kitchen with a working dishwasher, sink, oven and fridge! They took every last bit of rubbish away with them too! 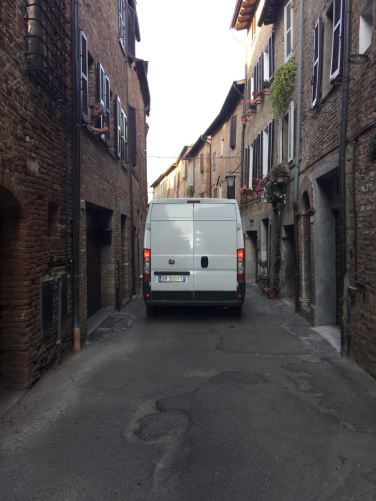 We keep walking in and thinking ‘yes, that will do nicely’ and expecting someone to come in and take the sample kitchen away again.  It seems like such a long time from choosing the units to actually frying a steak on the hob. The kitchen planner telephoned half way through and again at the end, to make sure we were completely satisfied with the fitting and design.  I said I would let her know as we need to use it first to see how it works.  Initially, I am not sure where all my herbs and spices, sauces and condiments will go, and the pots and pans and wine glasses, plates and cups; how will it all fit into a kitchen less than a third of the size of our English one? We are going to have to be really organised as the worktop is limited too.  I wanted a bigger hob but had to compromise with a smaller one to allow more room for preparation.

Dinner at Coppetta’s to celebrate. Don’t want to mess up our new kitchen.

And a nice bottle of local red

(Kitchen update: we have been back to the designer to ask for a couple of sliding drawers for the larger cupboards.  The shelves are so deep that it is hard to see things at the back and also tricky to lift heavier items out.  A pull out drawer will effectively double each shelf area. But because this is Italy and everything shuts for August, we won’t get any of these until September.)