The weather was mild, but grey and dismal with that intermittent drizzle that seems to get worse just as you pull in to have a coffee or walk the dog.

But we made good time and on the outskirts of Oyonnax we found ‘Les Grenouilles’ (the frogs). From the outside this B&B, situated on a small loop of a road, seems very ordinary but at the back of the house they have a large garden for secure parking which was hugely reassuring considering we had a car full.

You get a better view of this large, turn-of-the-century merchants house, built of warm cream stone, from here and the welcome from Andrine and her husband was just as warm. They explained that now their children had grown and left, they had decided to open the house and use the rooms as a B&B.

They also pointed out that, apparently, Oyonnax is the centre of development and research into plastics. Not many people know that. They also said that the town has the highest rate of employment in the European Union and that most of their guests are on business, despite being only a 20 minutes drive from the ski slopes.

Our room appeared to be an entire floor; it was enormous and full of beautiful old furniture including a double bed, two single beds and a 9’ x 9’ wardrobe that was the size of some hotel rooms we’ve seen!

Not much of a view, as the mist had come down and now it was raining quite heavily. Time to head into town and find the “Renaissance” restaurant as recommended by our host. The town, judging by some of the grander Victorian buildings, has always been quite prosperous although now many of the ordinary streets and houses have been demolished and replaced by modern cubes. They have kept, however, some great advertising works on walls around town. 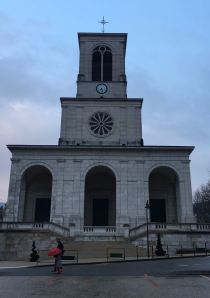 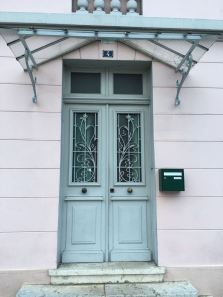 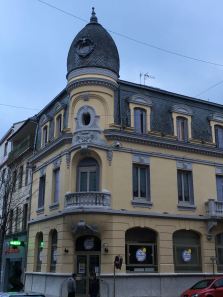 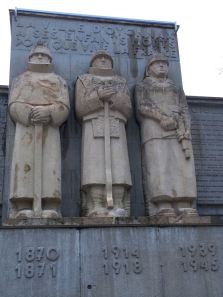 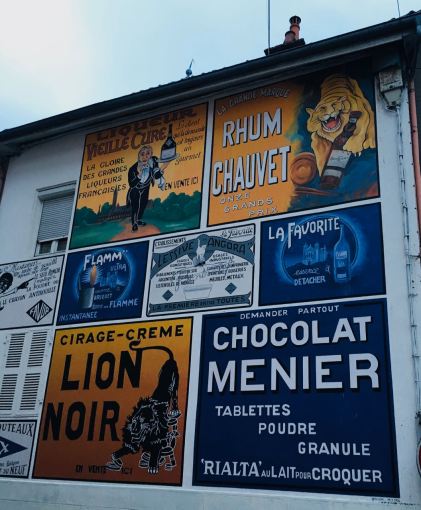 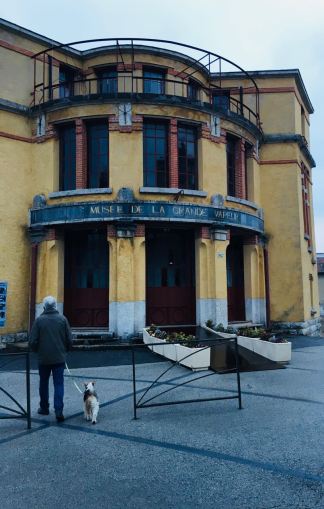 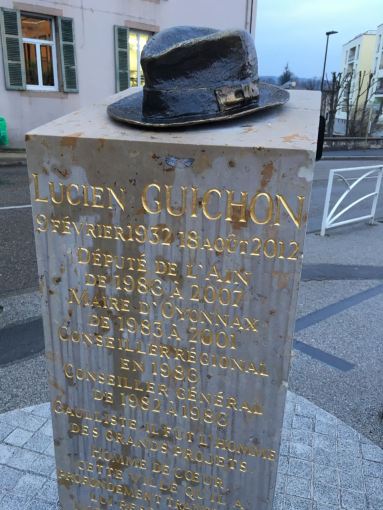 The wonderfully titled Musee de la Vapeur Chaude (Museum of Hot Steam) was across the road from our restaurant and is another great example of art deco but sadly the old turbines and displays are all locked away in what seems to now be an abandoned complex of rooms. Outside was a more modern tribute to one of Oyonnax’s past well-respected residents, a previous mayor, who was obviously recognized and symbolized by his hat now immortalised in bronze on its very own marble column.

We found the restaurant and were encouraged by the board showing dishes of the day and not a menu of several dozen pages where you know the microwave is working overtime. It featured lake fish (Lake Geneva, Lake Nantua and several smaller lakes are close by) and game from the nearby wooded hills and Jura Mountains.

Jamie had the parmesan soufflé with tomato and mint gazpacho and I had a fish terrine to start. This is where it all went a bit off the rails…..the gazpacho was overwhelmed by the mint and my fish terrine was very grainy and dry. Nothing was inedible and it all looked very appetising, but it just missed our expectations and left us a bit disappointed and bemused. 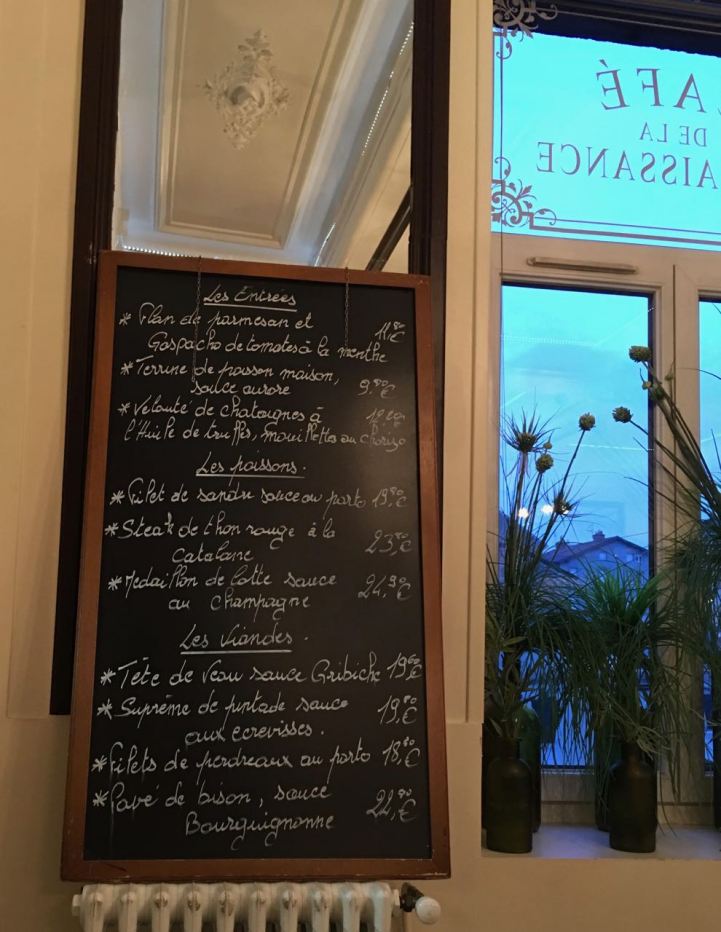 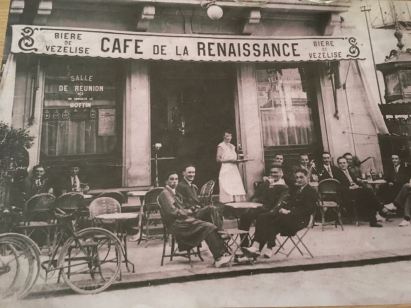 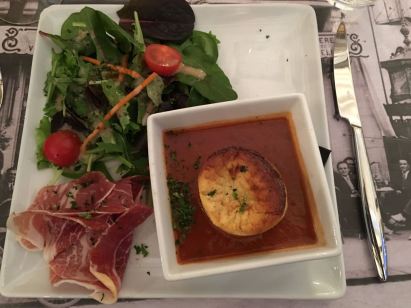 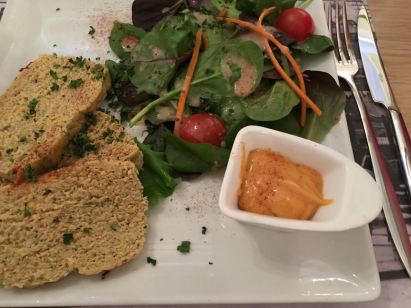 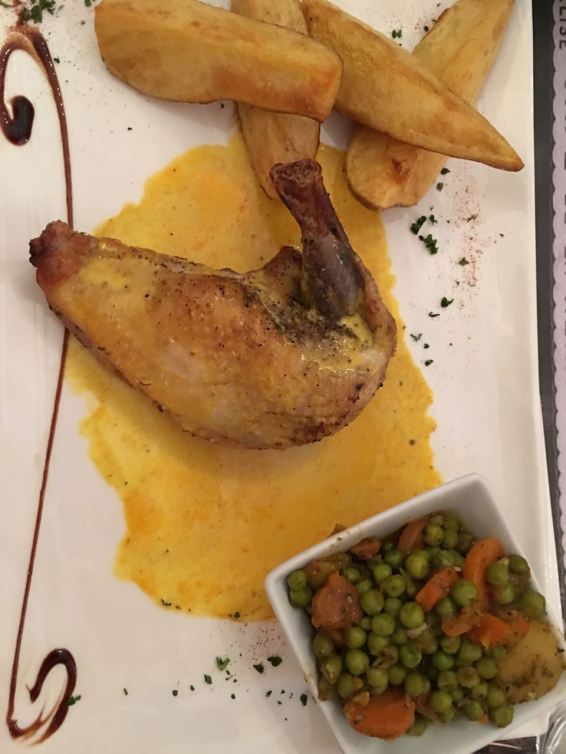 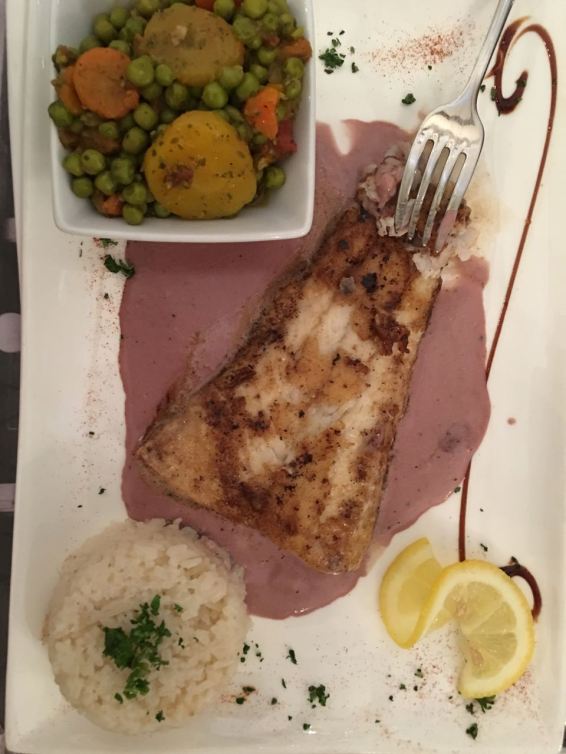 The main course was a fish fillet, a zander (a sort of perch-pike according to Google) in a port wine sauce, for Jamie and I had warned him when I saw it on the menu that this sounded like a strange combo. I was right; too rich and too sweet for a delicate fish. My choice was the Guinea fowl with a shrimp sauce. This shrimp flavoured sauce is sometimes called sauce Nantua, and is famously from the town of the same name nearby. The guinea fowl was tasty but the sauce thin and tasteless and both our mains were served with a side of mixed vegetables, on this occasion carrots and peas, which seemed to have been given a Moroccan seasoning. Rather than leaving the main dish to provide lead vocals, the veg were like some Mariacchi band; too loud, too colourful and not very good. We skipped pudding as the glimpse of a lurid orange crème brûlée on a nearby table didn’t tempt. So just coffee and back to our hotel. 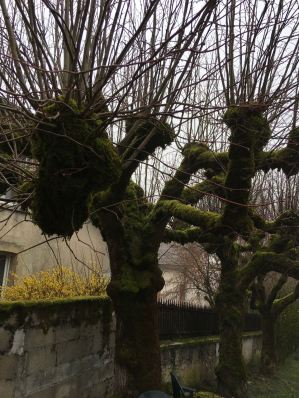 The next morning Daisy had a fun time playing with the hotel’s two dogs, a Yorkshire terrier and a very elderly Maltese, in their garden. Along one side of the garden were some wonderful pollarded trees covered in thick moss, straight out of a fairytale.

As we went back in for breakfast we spotted a huge orange rabbit and cat looking out from the owners’ sitting room at the playing dogs. Andrine told us that all the animals were rescued and get on and play quite normally – just like in a fairytale!

Time to leave these lovely folk and head towards the Mont Blanc tunnel, but not before a pit stop at the local Carrefour supermarket for bottles of sparkling Jura wine and assorted macarons.

Instead of following the motorway we chose to take the A roads to the tunnel and that is how we spotted the ‘Pomme d’Or’ restaurant in Vougy. This family-run restaurant had good reviews and we were all welcomed to our table. Daisy-dog was given a mat to lie on and a bowl of water almost before we had taken our seats! It turned out that they had owned a fox terrier too so thankfully were very understanding when Daisy made a grab for the waiter.

The specials of the day were appetising enough to make our choice very easy. I had a potato salad to start which was more that just potatoes. Served on a bed of crispy lettuce this tasty salad had parsley, egg, pickles and of course potato all served in a mustardy mayonnaise. The pork roast with porcini mushrooms was my main and Jamie chose the roast lamb with tasty morsels passed down to Daisy: it really is a dog’s life. Pudding had to be one of the fabulous choices we had spotted on entering, but which? The tarte-tatin, the apple cake or the mysterious sponge which turned out to be apricot cake … and all served with crême anglais. After two coffees we set off for the tunnel. 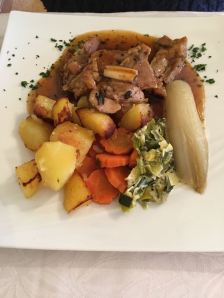 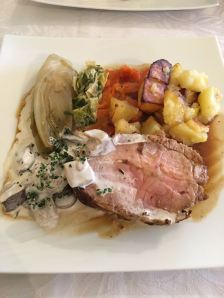 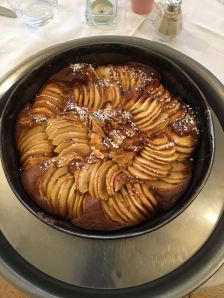 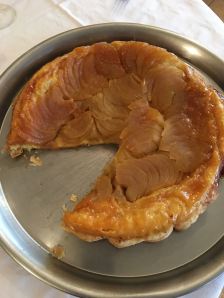 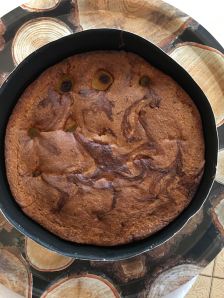 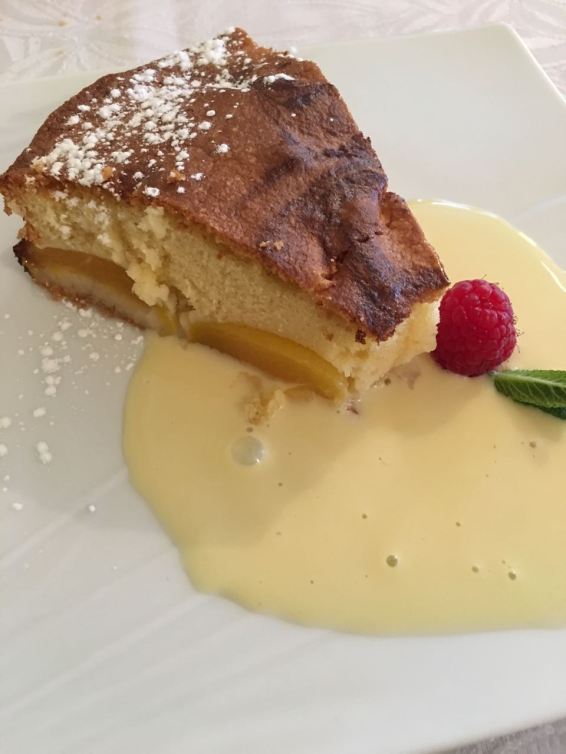 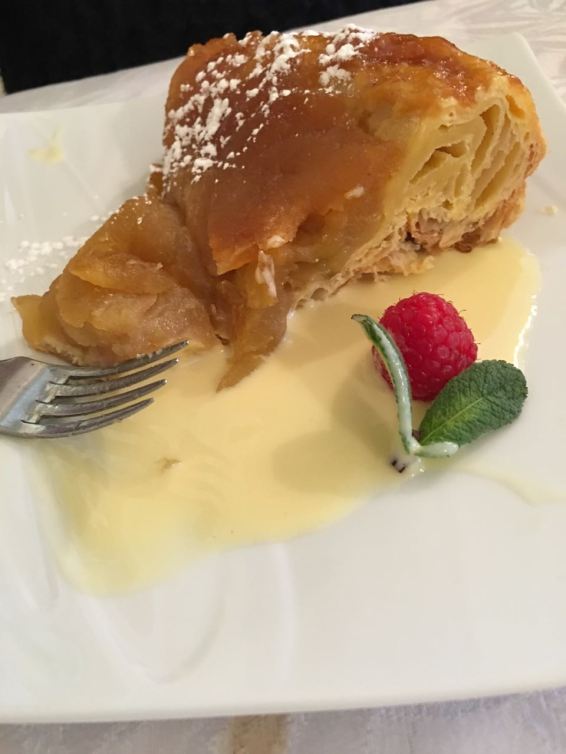 Snow flurries accompanied this last French stage and also out the other side towards Courmayeur, but they soon died out and meant that we made good time and arrived in Milan by five o’clock at the home our good friends.