We set off back to the UK on Tuesday. Amazingly, we managed to leave by 7:30am. We decided to avoid the Milan motorway route and follow the coastline road via Genoa. The motorway was really quiet and so we made good time and decided to stop for lunch somewhere small on the coast and Jamie chose Sestri Levante. A very sedate seaside town with a palm lined promenade and a some quite grand looking hotels that look like they might have featured in a Fellini film – with terraces, balustraded balconies on the rooms and in lovely faded colours. 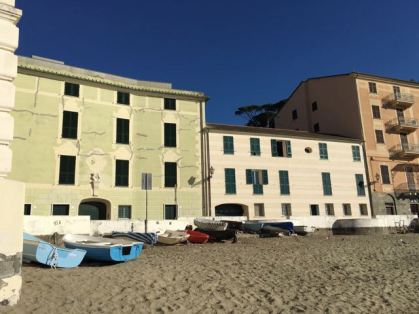 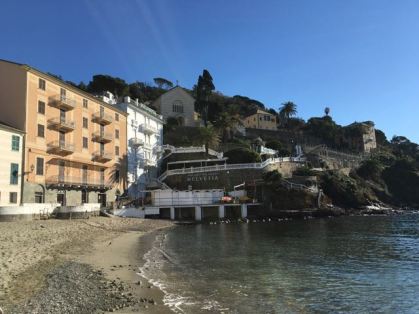 After we had walked Daisy along the beach and she had a paddle in the Mediterranean, we noticed two elderly ladies sitting on a bench enjoying the December sunshine. At this point I should mention that I left my coat in the car as it was really warm. I usually ask elderly residents for a recommendation about the best place to have lunch, on the basis that they would be concerned about the quality of the food rather than the style, otherwise why would you eat out and not stay home!

They gave a couple of choices and also suggested we walked round to the other side of town where there is a beautiful bay called La Baia del Silenzio – the Bay of Silence. When we got there it really was a sun trap and warm enough to sun bathe. Daisy had now got a taste for the sea and went out swimming quite happily, and wouldn’t get out, wagging her tail much to the amusement of people on the beach. I think this might have been her first time in the sea, if you don’t count the paddle in Clevedon. NOT quite the same…see photos! Lunch is an octopus fest. It had to be a seafood choice after weeks of slabs of meat and truffles. I have chosen the octopus menu, where each course, yes, you guessed it, contains octopus in some form. Jamie is having the Fisherman’s menu, which has got tuna and octopus. The name of the restaurant is “Polpo Mario” which means Mario’s Octopus and there is a painting, presumably of the owner, as an octopus in the entrance and even the tablecloths follow the theme. 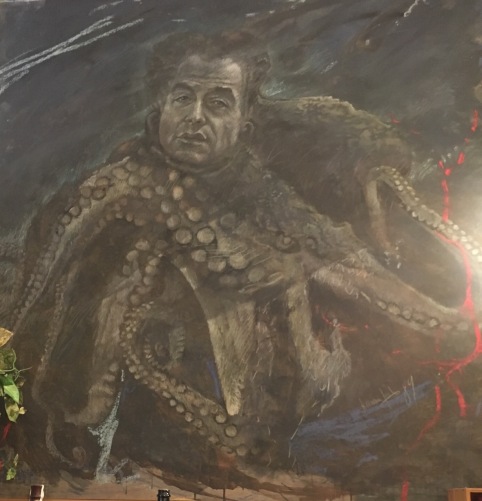 Now we are fed and watered it’s back onto the motorway and our first overnight stop in Saint Vincent, Aosta.

When we arrive, I have the Zuppa alla Valdostana soup with leeks, rye bread and loads of melted Fontina cheese. Jamie is having buckwheat pancakes stuffed with ham, cheese in a creamy cheese sauce. Followed by cured lard served so fine you could read the menu through it, on crusty bread and with chestnuts in honey. Perfect for a chilly Alpine evening in a wine bar basement listening to Chic, Curtis Mayfield, James Brown, Alexander O’Neil, etc.

As we are in the Alps we were going to have the traditional fondue or raclette or the bourguignone which is a stock-based fondue, but luckily we didn’t as it involves a minimum of 300gms per person of beef, plates of boiled potato, cubes of toasted bread and assorted pickled vegetables! Plus the cauldron of melted cheese or broth to dip it in. We did manage to squeeze in a hazelnut Panna cotta for pud, though.

The town of Saint Vincent though is weird mix of abandoned hotels, designer clothes and interior design shops and small stores with signs advising clients they are ceasing to trade. This is definitely the best restaurant. We are staying in a Best Western hotel and I am looking forward to a lovely bath as our house only has, and will have, showers.