Another long drive and here we are again in Citta della Pieve.

The journey wasn’t too heavy going as we stayed in Folkestone the evening before taking the Tunnel. This was a good move, as we could set off nice and early, which allowed time for lunch in Saint-Quentin and arriving in Dijon (home to Creme de Cassis and various mustards) at a civilised hour.

Our first choice of restaurant for lunch just outside Saint-Quentin (close to the motorway) was fully booked, but the kindly owner rang another nearby chateau to see if they had space, but they also were full. Sunday lunch is obviously as popular in France as in the UK.

So we headed into town and parked outside an inviting eatery called ‘Le Troubadour’.  The menu looked interesting and it was full of locals and jolly grand-meres who I would trust to only eat in establishments where the cuisine comes up to their own exacting standards. The dishes of the day were on a blackboard and I decided to have a first course only (to allow space for pud) and Jamie chose from the main course menu.  I thought my choice of egg ‘en cocotte’ with foie gras might be quite filling and rich, and I was right as the egg and foie gras were poached in a savoury creme fraiche sauce. A green salad and some french bread made it perfect and added one of my 5-a-day but the whole thing probably shot cholesterol levels through the stratosphere.  Jamie’s roast guinea fowl ‘a la grand-mere’ came with veg and potatoes dauphinoise. My pudding was a blackberry and amarena cherry mousse and Jamie went for the classic creme brûlée. The restaurant was run by two very nicely coiffured guys with twirly moustaches who swept through the busy room and even had time to offer our ‘petit toutou’ a bowl of water.  Apparently ‘petit toutou’ is French for little doggie.  I have taken to talking to Daisy in a French accent and to calling her Toutou as it feels very cosmopolitan!

Our overnight stay was in the Mercure in Dijon and, as it was Sunday evening, everything was firmly closed in the area. The hotel had a restaurant and a glimpse of the menu and the cheese trolley confirmed that eating in might be for the best. At that moment a coach of Chinese tourists arrived so we weren’t sure there would be space but we needn’t have worried as a Chinese takeaway delivery arrived with boxes of rice, assorted dishes and chopsticks for the tourists to take to their rooms. The whole restaurant was ours and one look at the menu and the wine list that included bottles for over a €1,000 hinted that this meal was going to be an experience. No driving required so we splashed out on two glasses of Kir and a rather nice Chablis, and enjoyed a beautiful meal. Starters were sautéed duck foie gras (yes again: what can I say but, ”when in France…..”) with a fig chutney and reduction of plums and cinnamon, and a plate of jambon persille (bit like a brawn made from shredded ham hock and parsley in a savoury jelly) served with a small salad.

For the main course, I had sweetbreads with sautéed wild mushrooms and Jamie had the fish of the day (something with no English name) with steamed assorted vegetables.  Dessert was going to be a must, as was the incredible cheese board. But this was going to need time to prepare, so after another glass of wine we were ready for battle.

As you can see from the photographs, the choice of desserts was phenomenal and you could choose as many tasters as you wanted. I went for the Illes Flottante, as it is so light, and a slice of apricot torte. Jamie had a selection from the cheese table.  We staggered away and slept well, determined not to eat anything at all the next day!

We left Dijon in the sunshine and headed off for the Mont Blanc tunnel (catching up with old episodes of Radio 4’s “Cabin Pressure” on the way). 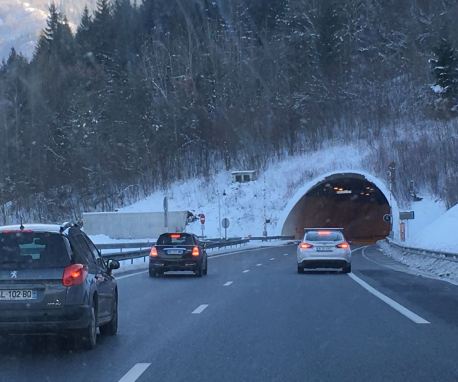