We have not blogged much the last few days as things are just more of the same, with visits to the house to check on how many new holes in the walls and floors have appeared.  The dreadful Snow White style bannisters have gone and the open stairwell looks really cool. But building regs will not allow three flights of potential danger.  The builder had a solution – just bolt on the banisters and after inspection take them off! Great idea but where do you store 5 flights of wrought iron railing when not in use. 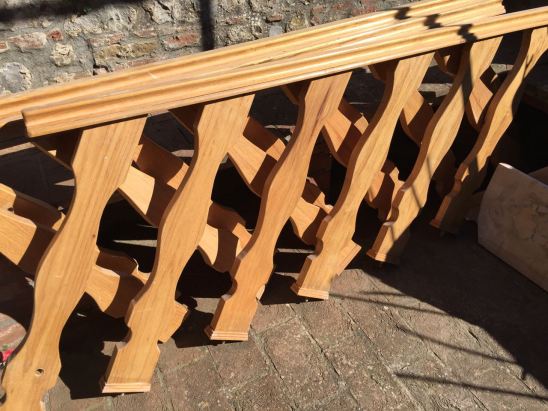 We have decided to lose the outside stairs from the balcony down to the garden.  Apparently the planners have discovered that they are illegal, which we knew but hoped they didn’t. They are horribly steep, a rusty red and we will gain some more space (for sunbathing) in the garden.  We are also wondering if, by removing the top level of the stair, we can increase the size of the balcony, which makes it more useful for a table, chair and glass of prosecco scenario.

The weather now is fabulous. Lovely and sunny, clear blue skies and sometimes a crisp wind (although still chilly in the evenings). But today it is still and we aresitting outside the Cafe degli Artisti having a preprandial stiffener. We think we could get used to this.  At the next table are some fellow residents, Americans, two Brits and an Italian, discussing the architectural merits of various embassies around the world.  Will have to up my game from “Have you heard that Ed Sheeran has 9 songs in the top 10 at the moment, beating Elvis’s record”!

This week has left me feeling like everything and nothing much has happened.  From the photos it still looks like a building site, now with the addition of a stainless steel tube for the stove.  I would really like to start decorating and putting in furniture.  The nearest Ikeas are either Rome or Florence, and we live half way between the two. In Perugia though, we have discovered Maison du Monde, which is a bit similar and closer. Having looked around I have told Jamie that I think we could go for a classic contemporary look with a little rustic chic thrown in.  He is still waiting for Google Translate to explain what that means.

We crept in to the garden to try and cut a bit more off the dreaded laurel hedge between us and the neighbour, but unusually they (or someone) was there so we held back.  Managed to cut the dead wood out of one honeysuckle, but there are two more, and one is huge.  I told them their time was limited if they do not flower, but realise I should have done it in Italian.  We sorted out some of the bags of rubbish to make a bit more space (it’s la dolce vita, all right).

Trying to re-cycle the hideous wooden bannisters as they are solid knotless pine and someone might love it.  We have some big slices of marble from the staircase and slabs of granite from the fireplace to find homes for, as well. Strangely, a trip to the local re-cycling centre to dispose of the garden waste was a waste, of time.  They do not seem to have a place for it but we were given a phone number to ring and I suppose someone will be able to tell us where to take it. Hopefully not Perugia, 44kms away!

In the evening we went to a concert by two saxophonists. Billed as ‘Bach in Black’ they played a variety of music from classical to jazz, and got some extraordinary sounds from their instruments. 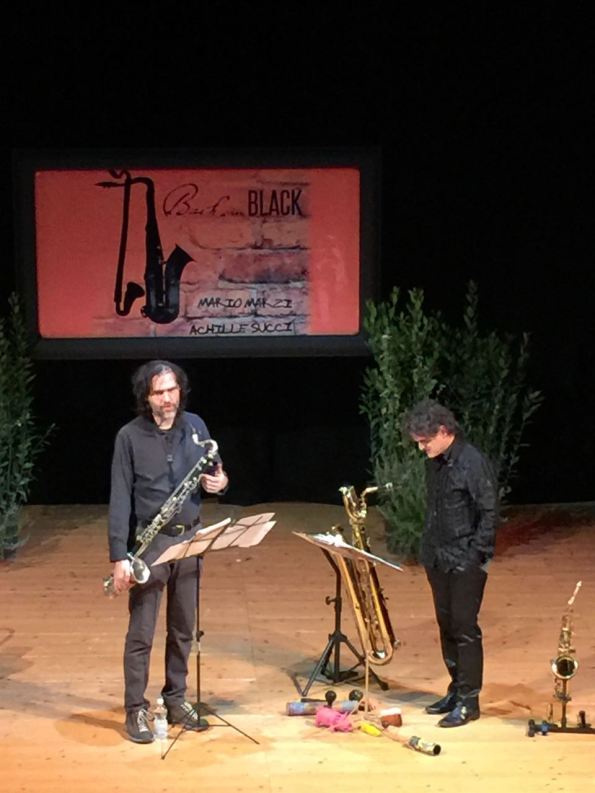 This was followed by a meal at the Hotel Vanucci, organised by the Amici della Musica, a local music society that arranges the concerts at the Teatro. The food was completely indifferent, but the people on our dinner table were really interesting.  One was the retired local doctor for Citta della Pieve who knew everyone and in particular the previous residents of our house: the eccentric Rowena and her long suffering husband, a lawyer.  Lots of stories about the town, and its inhabitants.  As the doctor he had seen patients in most of the houses and could remember wonderful anecdotes about some of them.  Turns out the hotel is owned by an American woman from the Cotswolds and her husband Lord Deighton who was something in David Cameron’s government, this we discovered from an American we met in the bar before dinner.