Nice spring day and although there was a chilly breeze it was really nice walking through the pinewood with Daisy this morning.  There were clumps of wild violets in blossom and periwinkle; really feels like spring is on its way. 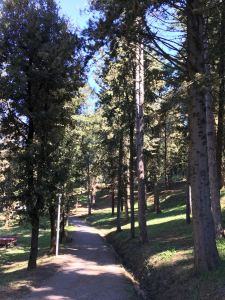 We went down to the Maestri del Cotto afterwards as today was the day our tiles come out of the oven. They have been cooking in the wood-fired oven for days and then for the last three, cooling down.  The oven holds 10,000 tiles and must take ages to unpack, let alone pack.  There were yellow ones, pinkish-white ones called ‘Terra Umbra’ and ours which are a darker mix and called ‘Invechiato.’ Although, they all look grey before they are fired. I am still amazed at the way they are made and prepared. I hope the photos show  just how hand-crafted they are. 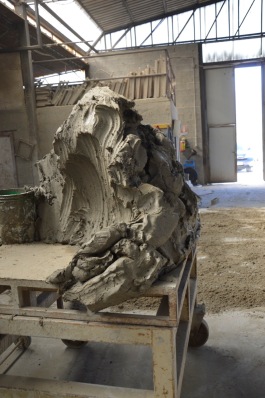 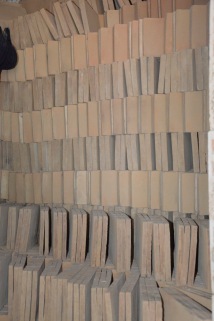 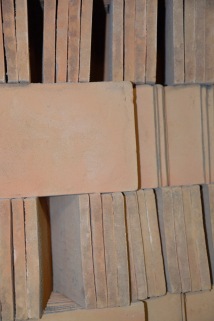 No sign of any bathroom bits though.  Because of the solid armoured concrete ceilings we cannot have central lights on the landings so we need to order two more ‘hankie’ wall lights…. I wanted hanging chimp lights from Seletti but Jamie wants to keep it all tasteful!  I now have to find a way of sneaking one in somewhere; you may get one in a guest bedroom, so be prepared.

The afternoon siesta was a good opportunity for a wander around town and a chance to take a few more photos.  In particular of all the traces of ancient windows and doors that still can be seen everywhere on the fascias of the buildings.  Traces of arched windows and doorways that have been moved over or blocked off.  There is also a building where the original roof line can be seen although now there is a third floor and a loggia.  This must have been before planning restrictions. 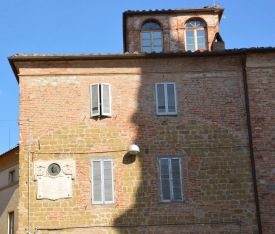 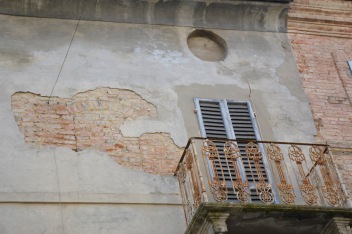 Here is a photo of our file at the architects:

And that is just for planning permission to do a bit of work indoors, change the colour of the shutters, have a new front door and garage door and a new tiny window in the kitchen.

While I was wandering about, Jamie had to loiter outside the house as we were expecting a printer to be delivered – second time lucky.  As the plumber and electrician were working a half day (again!) there was no one there to take it in. But the window for delivery was only an hour and, happily it arrived safely and on time.

We have come across a poor stray dog outside of town.  I am calling him Bo-Ho.  He is very matted and absolutely too fearful of people to come near. But yesterday we met some ladies who had brought him some food and today we donated some of Daisy’s biscuits.  He is always outside the gates of a villa which is odd as they have a Golden Retriever inside; unless they are new owners and the old ones just threw him out. It’s sad we have to share a planet with such types but hopefully he will slowly trust us, so we can get a lead on him, get him to a vet and find him a good home.