Saturday 24th and Sunday 25th June marked the culmination of two weeks festivities for the feast days of St Gervais and St Proteus and Sant Luigi di Gonzaga.  These celebrations have been organised and sponsored by the ‘Casalino Terziere’ in the town.  Their flags of red, white and blue and feature a castle tower.  Their club headquarters has hosted endless dinners over the last two weeks and Saturday night’s promises to be great.  We arrived around 8:30 and it was heaving with families and groups of friends. Luckily as we were just two we managed to squeeze onto a table.  There was a huge barbecue already roaring and the speciality of the day appeared to be snails and pigs chitterlings in a spicy white bean stew.  I stuck to the grilled pork ribs and Jamie went for the sausages, washed down with a very drinkable bottle of red at 5 euros. Spiced cake and amaro and two coffees later we headed out to the street to see how the floral preparations were going.

This year’s theme was the earthquake in Norcia and help for the victims.  All the proceeds from various activities were to be donated. Pictures were drawn up onto huge sheets of white paper and stuck down on the main street.  The intricate details were then filled in with huge black bags of flower petals, dried straw and grass, seeds, desiccated coconut, coffee grounds and cocoa nibs, to name but a few of the ingredients. The children, their families, and local shopkeepers (including our next door neighbours, who have a jewellery shop) were all on their hands and knees from early evening, and when we emerged from our supper at 11 o’clock, some had finished but others hadn’t even started.  It was so great to see all the generations involved and having a great time, even though it looked really difficult and intricate work.  Apparently some groups were still at it at 4am. 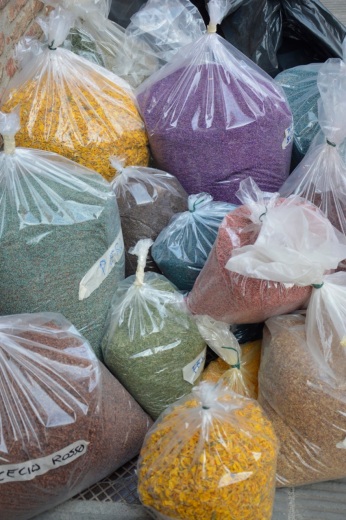 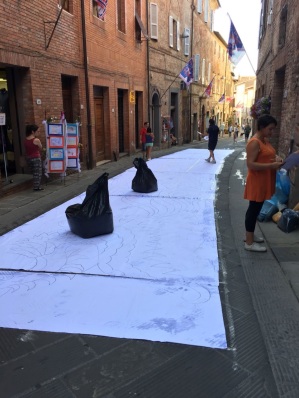 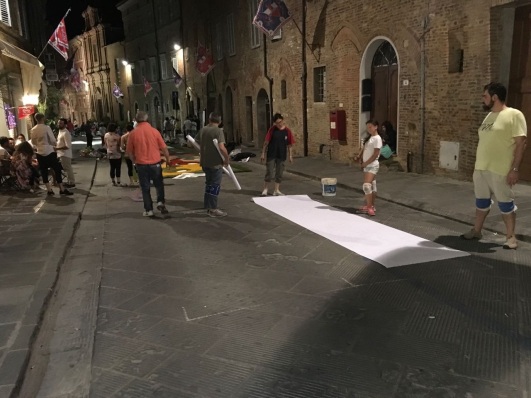 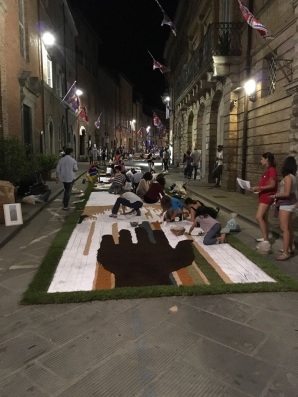 Local primary school children had been asked to do drawings of the earthquake or the aftermath and the subsequent rescue efforts.  They came up with some wonderful ideas from tumbling buildings to police helicopters, doctors and nurses and red cross tents.

Our neighbours were working with another adjacent shop on their choice, based on a brilliant ‘Shakey House’ drawing by Elena, it was one of my favourites. Great colours and they managed to get theirs finished early on.

Some of the pictures by other civic groups were incredibly detailed.  A few had chosen to depict buildings that were destroyed or damaged or religious images of Christ, the Madonna and Saint Benedict, the patron saint of Norcia, whose statue in the main square remained standing and undamaged.  The perspective and shading details took a long time and many groups were working long into the night.  A recurrent theme was that of ‘helping hands’ and although the sadness over what had happened was present in the representations, there was also a sense of moving on into a brighter future. 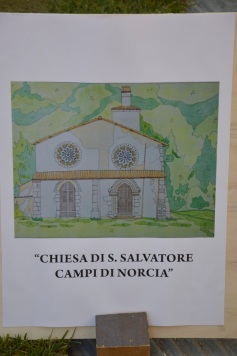 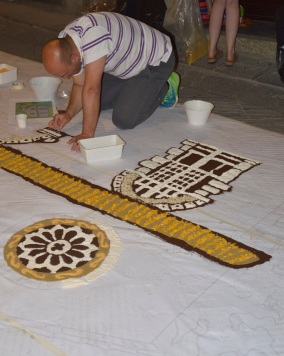 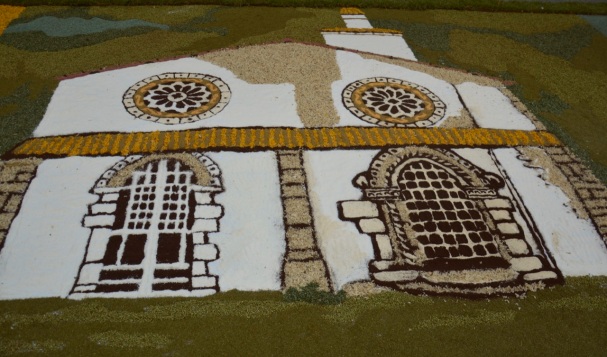 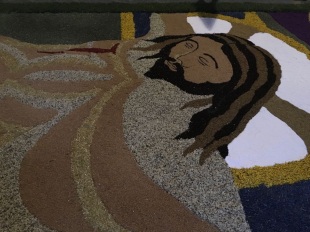 By Sunday morning everything was ready.  Loads of tourists and all the residents were out, enjoying the small craft market, the flower stalls in the main square and, of course, the spectacular floral display that stretched the whole length of our main shopping street, and that would last only one day! 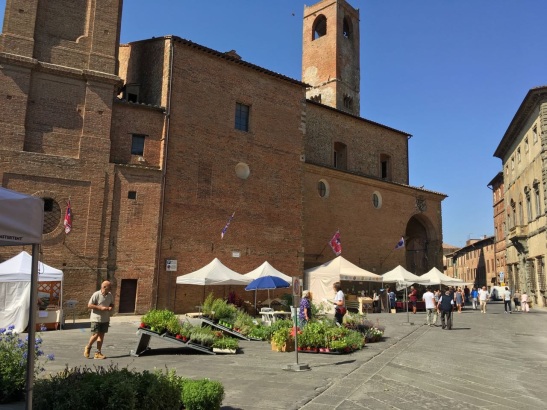 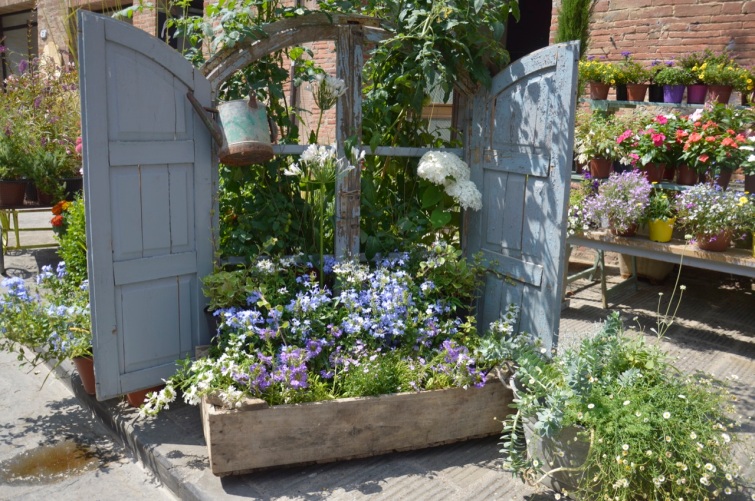 These photos do not really do justice to this immense effort and I hope they raised a lot for such a good cause, and raised awareness because, as the months have passed the victims have been largely forgotten and the destruction remains a huge burden on the resources of that region and its population. 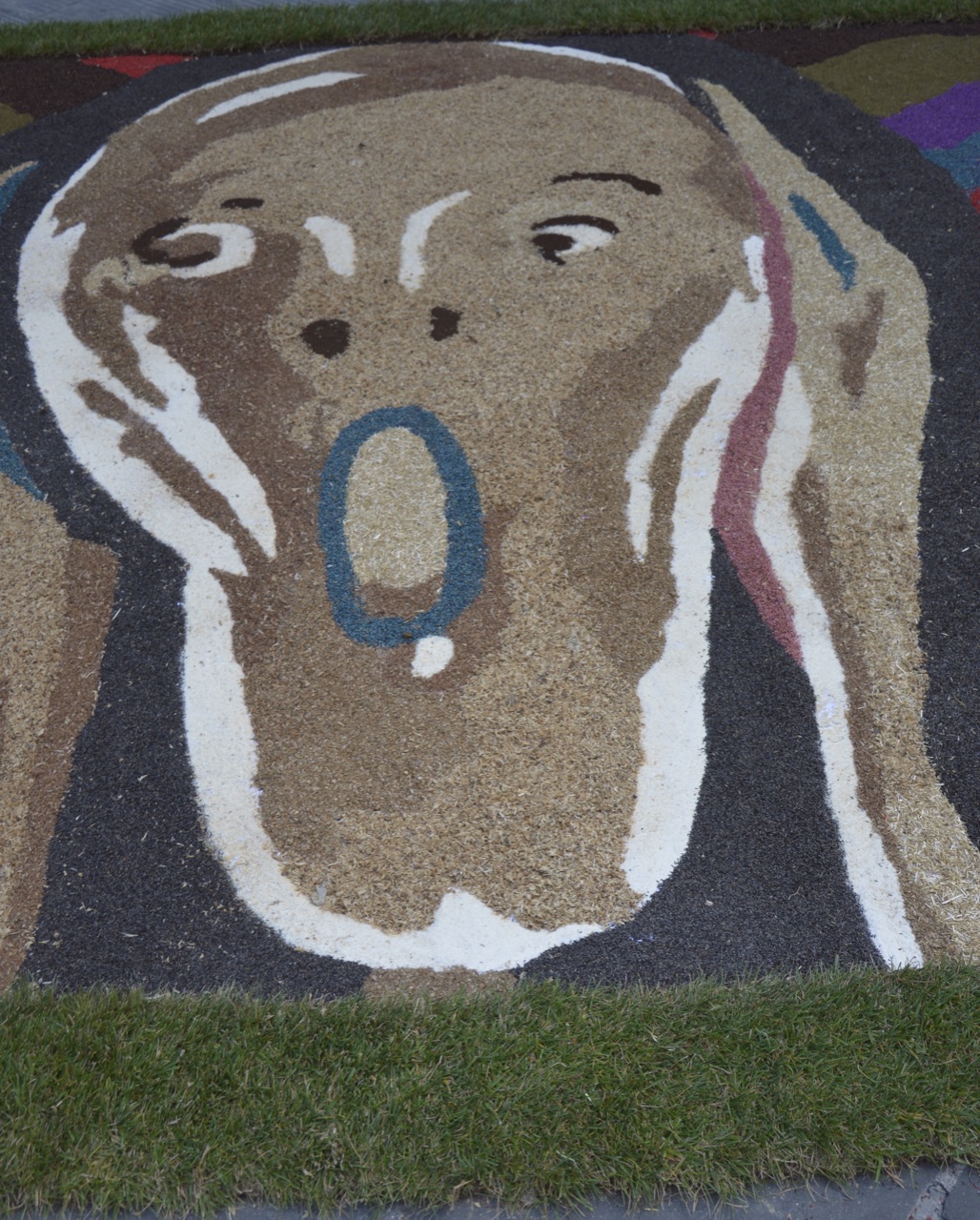