The forecast for today and tomorrow is not good. Better to go to Orvieto today in that case as there are more places to escape into if it rains in Assisi, with a church on every corner.  We had no problem parking and began our visit by admiring the view from the Castle ramparts.  We walked up the main street and into the Cathedral square. This never fails to impress as this is such a wonderful building.  With its striped sides and then elaborate facade you appreciate just what a special place this is and why it was protected by an agreement during the second world war.  Thanks to the intervention of the Pope, the German army and the Allies agreed that it should and must be protected from any bombing raids.  Seems such a civilised decision in comparison to todays indiscriminate bombing and destruction of historical sites. 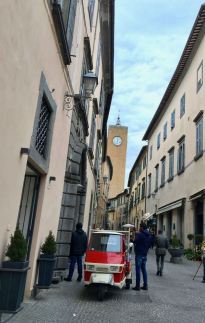 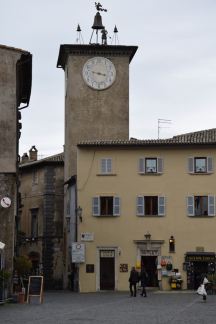 When you get up close the carving of biblical scenes in the marble panels is so intricate, the coloured and gold mosaics that glow in the setting sun as the cathedral faces west, and the streets opposite funnel the golden light down onto the square.  Even inside, the cathedral does not fail as in its simplicity you can appreciate the enormity of the building and what a feat of building skill it must have taken in 1290. I particularly love the windows. There is the usual elaborate and  glorious stained glass rose in the frontage but the side windows appear to be made of enormous slivers of a semi precious stone, and the guidebook explains that they are of alabaster to keep the interior cool, by filtering the fierce summer sunshine. They cast a warm golden light and I have not seen this kind of glazing used anywhere else. 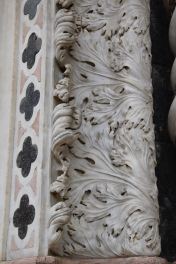 We booked tickets for the Etruscan caves tour later in the afternoon and set off to find our destination for lunch: Osteria dell Mamma Angela in Piazza del Popolo.  I had booked it as I wanted to be sure all seven of us would fit in.  Last time we ate on the square but the weather was not going to allow this.  We had stuffed rabbit, radicchio salad, aubergine parmigiana, ravioli stuffed with ricotta and walnuts amongst other things and a good time was had by all.  The rain had eased by the time we left the restaurant and we headed to our cave tour.  There are thousands of caves and most houses in the city have them.  They are pre-Roman and were used for water sources, pigeon breeding, making olive oil and storage to name just a few uses.

We headed home and after a quick cuppa we were changed and heading out to Coppettas in Citta della Pieve, for everyone’s next Umbrian experience!  Tomorrow we are going to Assisi.